How Terrell Owens builds his abs

Share All sharing options for: How Terrell Owens builds his abs 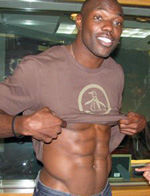 Whatever your opinion is of Buffalo Bills receiver Terrell Owens, there is no denying his amazingly sculpted body (he says he has 6% body fat at 220 pounds). A lot of it is great genetics, plus the time as a pro athlete to devote to working out (and the money to hire personal chefs for the road). But a lot of it is hard work and discipline.

The Wall Street Journal has an interactive segment, with video, with T.O. discussing how he keeps so ripped. It discusses his training, his sleep habits and what he listens to to get motivated (Jennifer Hudson and Jay-Z are two faves). To me, though, the most important factor is his diet. You can have muscular abs, but they won't show if covered by a layer of fat.

During football season, breakfast is usually one bowl of oatmeal and eight to 10 scrambled egg whites. He might have a banana or low-fat yogurt for a midmorning snack. For lunch, he'll have two baked chicken breasts or 10 ounces of grilled turkey breast, and a baked sweet potato. Fruit, a small salad or about 20 almonds is his afternoon snack. Dinner is usually 12 ounces of grilled fish or eight ounces of grilled lean steak, with steamed brown rice or whole-wheat pasta. His evening snack is usually steamed or raw vegetables. ...

Mr. Owens doesn't drink alcohol and stays away from sweets during the season. When the season comes to an end, though, his first stop is a fast-food restaurant -- usually Domino's, where he orders a large Meat Lover's pizza. "I feel like I can reward myself for a few months and rest the body," he says. "But then I get right back on track to prepare for the season."

It's a very common sense diet, absent a lot of gimmicks, and his breakfast is exactly what I eat every day. Go figure -- T.O. and I have something in common, though he still is a bigger drama queen.