NFL opener: Steelers pull another one out

Share All sharing options for: NFL opener: Steelers pull another one out 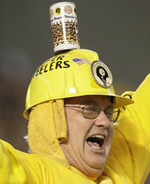 The first game of the NFL season looked a lot like the end of the last season -- the Pittsburgh Steelers did enough to survive while the Tennessee Titans played well enough to win but blew several scoring chances. The Steelers' 13-10 win in overtime wasn't a thing of beauty, but I found it mostly engrossing. One Titans fan I know probably just found it gross since Tennessee's 2008 season ended in similar fashion with a 13-10 loss in the playoffs to the Baltimore Ravens.

The Steelers began their defense of their Super Bowl title looking shaky -- QB Ben Roethlisberger was sacked four times and they had no running game (36 yards total) but got bailed out again by a defense that kept the score close and by Titans kicker Rob Bironas missing one field goal and having another blocked. In addition, all-everything safety Troy Polamalu hurt his knee and is likely out three to six weeks.

The Steelers were also greatly aided by Chuck Cecil, the new Titans defensive coordinator who decided to rush only four in the second half, thereby allowing Roethlisberger tons of time (he threw for 363 yards). The same Titans' front four that sacked Roethlisberger three times in the first half got him only once in the second after the Steelers adjusted their blocking scheme. I lost count of how many times Roethlisberger pumped, scrambled and pumped again since he had so much time.

The game ended in the most anticlimatic way possible for an NFL game -- by a chip-shot field goal on the first drive of overtime, thanks to the NFL's dopey overtime rule that doesn't guarantee each team a possession.