Even though the Los Angeles Dodgeball Society has always had Gay & Lesbian players and teams, some wanted to expand further into local gay communities and help create an atmosphere of competition and fun. Now Jake Mason has created a West Hollywood dodgeball league that is primarily made up of gay and lesbian players.

In a game filled with double entendres, the league features teams like Balls Deep, Jocko Homos, What Would Jesus Dodge and the Fang Bangers.

The ultimate goal is not to only dominate on the court, but to provide a great place to meet new people," Mason says. "The social aspect of dodgeball is just as important as the game itself. The competition often continues at GYM Sports Bar, our official after-party hangout, allowing players to mingle and make new connections.

The League started this week and the season begins Jan. 26, so email Jake if you're interested!

From the league's press release: 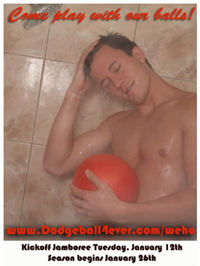 The Los Angeles Dodgeball Society is putting the RECESS in recession. It's time to put on your gym shorts and knee sox and have a ball. The co-ed social and sports phenomenon, adult dodgeball, is coming to WEST HOLLYWOOD.

WEST HOLLYWOOD DODGEBALL is the newest league offered by the LADS. The combination of "soft core" "no-sting" balls and a "winning is for losers" emphasis on fun, make adult dodgeball the most exciting and friendly activity to hit town. With 5000 members in Los Angeles alone, it is clear, that dodgeball is the name of the game.

"Our popularity has rapidly spread to WeHo residents and now they can have a local league to call their own," says Michael Costanza, President of LADS.

The WeHo League kicks off on January 12 at the West Hollywood Park, 647 San Vicente Blvd. Players may join in groups or as individuals. League Night is every Tuesday starting at 8pm. No experience is necessary and the rules are simple. Dodgeball is a schoolyard game that has returned with a friendly face.

"The game is easy and the good times are endless. We play the best/worst music of all time; and bad dancers often translate to great dodgeball players. Our biggest objective is to have fun."

On January 12th the League will host a "Jamboree Kickoff", introducing all players to the court and defining the rules of the game. Everyone over the age of 18 is welcome to join. All registered players will receive a league T-Shirt. What are you waiting for?

"It's a great place to meet new people. The social aspect of dodgeball is just as important as the game itself" Says WeHo League Manager Jake Mason. "The competition often continues at GYM Sports Bar, our official after-party hangout, allowing players to mingle and make new connections"

To sign up for the league, visit their Web site or email Jake Mason. First games of the season will kick off on January 26th. Cost is $50 to join and includes a league t-shirt. All leagues are co-ed and last 9 weeks. You can sign up with a team or just as a single.