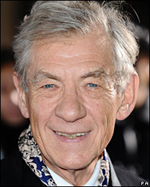 The veteran actor, who is open about his homosexuality, said sports stars were "absolutely admirable people", but were afraid of negative reaction among fans.

"When it comes to the business of simply being honest about who they are, some of them become little shrinking violets because they're afraid, probably, of being booed from the terraces, and that must be a horrible experience and shame on people who do it.

"But it ain't [sic] going to stop someone being a fantastic footballer because they're honest about their private lives, is it?

"I don't believe so and the world is changing and sport, I'm afraid, is very slow to catch up".

Anyone who has read Outsports would find little news in what McKellen said. But I don't think negative reactions from fans is the only thing keeping athletes closeted. There are many other dynamics, including fearing reaction from teammates, club management and sponsors.

And athletes have short careers and are relatively young while in their prime, so being public about their sexuality is one thing they feel they can put off until they retire. McKellen is 70, but did not go public with his homosexuality until he was 48, a time when virtually all pro jocks have called it a career.