Share All sharing options for: Houston Mayor Annise Parker is out sports fan 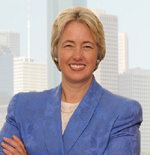 Newly elected openly gay Houston Mayor Annise Parker is a big sports fan, and Ross Forman talked with her about her love of sports. Forman asked her if we'd see an out active male pro athlete in the next five years:

"No doubt, a major active player [will come out while still active]," Parker said.

No doubt? I'm curious to know what she knows. The culture is certainly ready for it now, but no doubt it happens in five years? I've gotta believe she knows something to be so sure. If she has some insider information, she shares what sports it's in:

"I think some major soccer stars will come out in the very near future," she said. "I don't know enough about the culture of hockey; I [also] wouldn't be surprised to see some baseball players [come out while active]."