Share All sharing options for: Cowboys finally win, Eagles do another el foldo 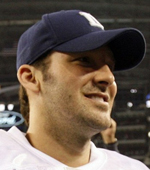 The Dallas Cowboys whipped the Philadelphia Eagles, 34-14, for their first NFL playoff win since 1996 and cemented the Eagles' rep as the most underachieving team of the past decade.

The Cowboys dominated the wild card game and beat the Eagles for the second time in six days. It was a stunning turnaround; a week ago, many were labeling Philly the best team in the NFC after they had won six games while averaging 31 points a game. In the two losses to Dallas, the Eagles were outscored, 58-14.

After being December/January dogs the past few seasons, the Cowboys have won four in a row and look like a legitimate Super Bowl contender. They play at Minnesota next Sunday in what should be a terrific matchup. With Brett Favre now wearing purple, I'll be a big Cowboys fan for a few hours.

The Eagles end the NFL decade having won 102 regular season games under Andy Reid, third most. However, the top two winning coaches (Bill Belichick and Tony Dungy) have Super Bowl rings, while Reid made the big game only once and lost. The biggest stat for the 2000s Eagles is four NFC title game losses, two at home. They Eagles play in the weaker conference and only one time (2002 to Tampa) did they lose in the NFC playoffs to a team that went on to win the Super Bowl. That's the mark of an underacheiver.

I am not sure what lies next for Philly. They have a lot of offensive talent, but need to realize that it is legal to run the ball in the NFL. They had zero first downs rushing against Dallas, while at the same time QB Donovan McNabb was dreadful. It will be an interesting offseason, but for Philly fans take heart -- pitchers and catchers report in a few weeks.