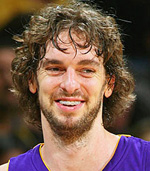 Today is World AIDS Day and a good time to reflect on athletes who are doing their best to fight the disease. Two of them are Magic Johnson (former Los Angeles Laker) and Pau Gasol (current Laker). Johnson tested positive for HIV 19 years ago and his struggle against the disease helped motivate Gasol to get involved.

“I was 11 years old at the time,” said Gasol, who grew up in Barcelona. “It had a huge impact on me. At the time, all I knew about AIDS was that it equaled death. One of the best players in the history of the sport that I loved was going to die. That’s what I thought.”

Gasol has traveled to Africa to promote AIDS awareness, contributing both his time and money (Steve Aschburner of NBA.com has a terrific profile of Gasol the activist). Along with NBA players Al Horford and Russell Westbrook and the WNBA's Candice Wiggins, Gasol has cut a PSA that started running Wednesday (video below).

For Johnson, he is now as known for being a successful businessman and activist as for being a basketball legend. The announcement in 1991 that he had the AIDS virus shocked the world since it was then considered a death sentence. Johnson has not only survived but thrived and Sunday was honored by the AIDS Healtcare Foundation with its first "World AIDS Day Magic" award.

“Who would ever have thought that somebody would admire you and it’s not about basketball,” Johnson told Billy Witz of Fox Sports. “I haven’t played in 15 to 20 years and now when people come up to me it’s never about basketball. I guess I’ve turned the page on another chapter in my life.”

Johnson is focusing his attention on minority communities:

“A lot of people can’t afford to buy their drugs or leave their community to go get tested or get the proper health care,” Johnson said. “We have to educate people, especially in the black and brown community. That’s been my focus through the last 10 years, through the churches, through the schools and through the colleges as well. The numbers are too high. When you think about the new cases, more than 50 percent are African-American. We’ve got to bring those numbers down and work on the stigma as well, (plus) the it-can’t-happen-to-me (perception).”