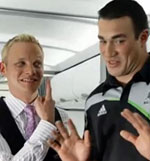 An odd story out of New Zealand involves the national rugby team, the All Blacks, shooting an airline preflight safety video that has raised the ire of some gays. In response, Air New Zealand has edited out a bit where player Richard Kahui declines to kiss gay male flight attendant Will Coxhead on the cheek. You can watch the video below.

Operations and safety manager David Morgan said among the complaints was a suggestion from a professor that the video could lead to gay male suicides. ...

"When we created this video and discussed the scene featuring a gay male flight attendant and a rugby player with key stakeholders, including a number of the gay community, we received none of the feedback we have in the past week," Mr Morgan said.

"The scene was not something that we, the people we tested the scene with, or indeed the participants in the scene, viewed as distasteful or likely to cause concern."

Coxhead, the flight attendant, is upset that there is controversy over a video he was proud of being a part of:

I agree with Coxhead on this and am sorry Air New Zealand cut the scene (which they did to err on the side of caution). The player does not react violently or seem repulsed. He gives the same reaction I would had a female attendant asked me to kiss her; does this mean I'm heterophobic? On the other hand, the adorable Coxhead would get a peck on the cheek in a second.

Watch the video (it's actually much more entertaining than your normal safety video) and decide for yourself. The suggested kiss comes at the 2:51 mark. Please post your thoughts below.