Michael Vick wants a dog. Should he have one?

Share All sharing options for: Michael Vick wants a dog. Should he have one? 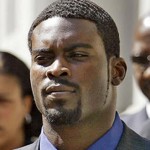 Among the conditions imposed on quarterback Michael Vick for his conviction on dog fighting charges was a liftetime ban on owning a dog. He wants that changed.

"I would love to get another dog in the future," he told theGrio. "I think it would be a big step for me in the rehabilitation process. I think just to have a pet in my household and to show people that I genuinely care, and my love, and my passion for animals."

Too bad. I think Vick has forfeited forever his right to own a pet. Especially when he gave this answer to the question of whether anyone told him that dog fighting was wrong:

Anyone with a shred of humanity could have told him it was wrong to torture and kill animals and he should have known it was wrong; he knew it was wrong, which is why he went to great lengths to keep his operation hidden. I would never allow Vick to have a dog. He can always demonstrate his newfound love of animals by volunteering at an animal shelter, where he can show as much love as he wants for pets under supervision.

I am curious as to what others think -- should there be a statute of limitations on Vick owning a dog? What about any other pet?