Really big and historic news out of Washington, where the U.S. Senate today voted, 65-31, to repeal the military's "Don't Ask, Don't Tell" policy. A filibuster against repeal was defeated, 63-33, setting the stage for the final vote. The bill has already passed the House, and President Obama said he will sign it. It will take a few months for new policies to be implemented, but DADT is DEAD.

This is a vote a long time in coming and five years from now people will wonder what all the fuss is about. Polls of military personnel show a large majority support ditching DADT and its defeat was inevitable; however, repeal seemed dead just a week ago so it's a surprise that it happened now.

The real heroes in this fight were the hundreds of LGBT activists who fought tirelessly against this discriminatory policy for years, even when the cause seemed hopeless. They deserve all our thanks.

We would love to hear from readers, especially active or retired military, on how they feel now that DADT will soon be history.

This cartoon from Mike Luckovich of the Atlanta Journal-Constitution says it all: 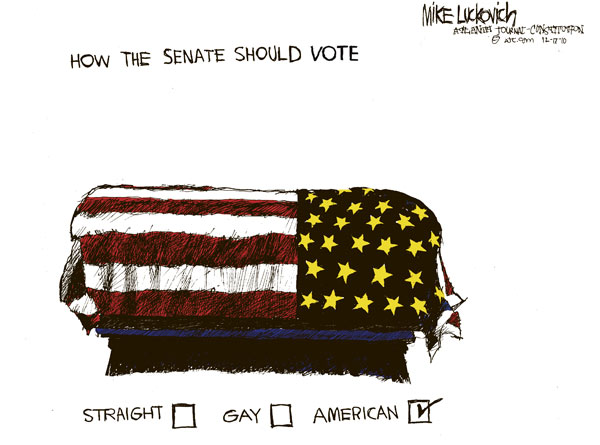