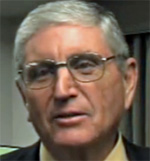 Former University of Colorado football coach Bill McCartney, back in the news since he wants his old job back, now says he is sorry if people took it the wrong way when he called homosexuality an "abomination" in 1992. From the Boulder Daily Camera:

"The Bible says the whole gospel is found in the first two commandments, and those commandments are love God and love your neighbor as yourself," McCartney said. "What I regret is that I did not communicate that. I don't judge the gay community, and anybody who gets the impression that I do, that's just not the truth. I didn't communicate that well that day, and I regret that. I ask the forgiveness of anyone who thinks I judged them or look down on them. I don't." ...

"Looking back on it, I regret that I said what I did from a university podium wearing a university shirt. I wish I hadn't done that. It was inappropriate to say that at that time."

The university has received letters from employees urging against McCartney's rehiring because of his homophobic statement and for founding the group Promise Keepers that they see as sexist. There have also been those supporting his hiring, harking back to the Buffaloes' great success under his coaching regime in the late 1980s and early 1990s.

Nice try, but I'm not buying. McCartney, 70, made his "abomination" comment in support of the anti-gay Proposition 2 and it took him 18 years to issue the classic non-apology apology. How did he not properly "communicate" what he meant. It seems pretty clear to me.

I want to know whether he still thinks being gay is "an abomination against almighty God," or whether this is is damage control to try and get hired? I think we know the answer.

Update: Colorado has offered the job to one of McCartney's former players, Jon Embree.