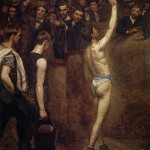 There is a fascinating exhibit at the National Portrait Gallery (that has gotten rave reviews) called "Hide/Seek: Difference and Desire in American Portraiture." In dozens of pieces that go back to the 1800s, the show demonstrates how same-sex themes made their way into American art, often going unnoticed by the public at large. One sports example comes from an 1898 painting of a boxer by Thomas Eakins, that drips with same-sex desire. Writes the Los Angeles Times:

The exhibition attempts to ferret out the hidden clues. In the 1898 painting "Salutat" (Latin for "He salutes"), Eakins portrays a 22-year-old, featherweight boxer known as Turkey Point Billy Smith as he waves to the crowd after a victory. Boxing matches in those days were all-male retreats, renowned for their brutal masculinity. But Eakins does not paint Smith in the act of fighting. ...

Instead, Smith is standing alone in scanty trunks that reveal most of his buttocks. The men in the crowd are ogling him much as they would a half-naked woman. This realistic 19th century sports scene is clearly homoerotic to 21st century eyes. But this aspect had long been ignored in shows and books about Eakins.

This is reminiscent of photos we ran in 2003 from a book showing same-sex intimacy in sports teams from the early 20th century.There is also a painting (see below) of an all-male beach scene from 1915 that could have been done at Fire Island this summer

The "Hide/Seek" exhibit runs through Feb. 13, but if can't make it to Washington, you can view the pieces online. 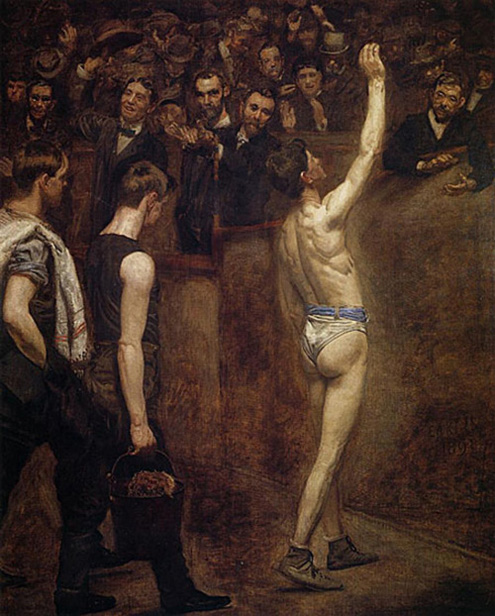 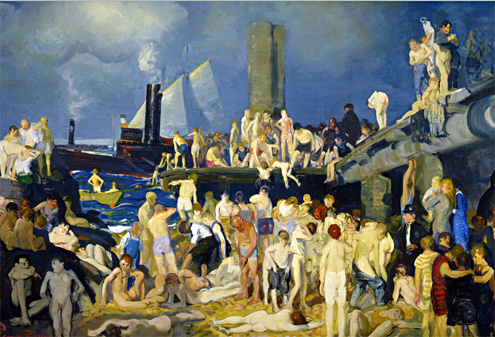