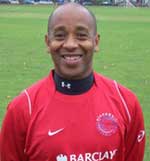 Aslie Pitter, who founded the gay Stonewall Football Club in London, was among those honored in Britain for New Year's as a Member of the Order of the British Empire (MBE). It's an honor bestowed by the British monarchy and recognizes distinguished service.

Pitter, 50, was honored for his impact on tackling homophobia in sport through his dedication to London-based Stonewall FC. ...

"I just feel so honored today, although it's recognition for everybody in the club that we're doing a good thing and helping people fulfill their potential. It's a recognition of English grassroots football."

Stonewall FC has become the gold standard for gay soccer teams and it was fun watching them play this summer at the Gay Games in Cologne. Pitter, who now manages the club's second team, told the BBC about his initial fears of starting such a group in 1991.

"Being black and being gay I thought I might come in for a lot of stick. In our first game we were sharing a communal shower with seven other teams and I was pretty nervous. But it has never really been a problem."

Bravo to Pitter for being a trailblazer and breaking down barriers.