Packers' billiard-ball uniforms the worst ever

Share All sharing options for: Packers' billiard-ball uniforms the worst ever 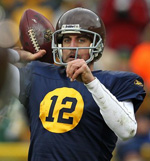 We need Comic Book Guy to say "worst uniforms ever!" about the hideous throwbacks worn Sunday by the Green Bay Packers. They were the same uniforms worn by the 1929 championship Packers and in this case older does not mean better.

The ugly brown helmets were meant to resemble leather helmets of the era, but they looked like they had been left out in the rain and turned to rust. Even worse were the jersey numbers on the front, which would look good only in a dimly-lit pool hall. Even Packers quarterback Aaron Rodgers was not a fan:

"Since I got here I've been hoping for a throwback uniform game," he told FOX-11 in Wisconsin. "You know, these are not what I was expecting but I am excited to be in the throwbacks this weekend."

I pick my favorite throwback uniform of all time, along with this week's hot player and a look at all eight division races in my Week 13 notes.