The staid, lame U.S.O.C. has struck again, forcing bronze-medal winning snowboarder Scott Lago to leave the Games after suggestive photos appeared of him. One shows a woman kissing his bronze medal strategically placed beneath his navel.

How shocking! A young, healthy, virile, medal-winning athlete having a little fun. And he's a snowboarder. Those guys do nothing but train, sleep, drink milk and read the Bible. He needs to be sent home lest he sully the image of the U.S.O.C. Bribery is fine for these people, but not a jock having a little harmless fun.

From TMZ, which got the pics via Splashnewsonline:

Lago apologized but has kept his sense of humor and sent this Tweet:

"Got home this morning to all my homies," he said on his Twitter site. "Such a good Olympic experience. Keeping my medal in a safe spot for now haha."

Here are the photos from Splashonline that forced Lago to head home: 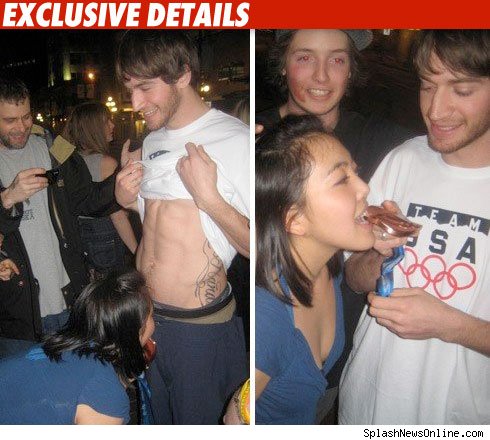