Share All sharing options for: HBO talks with transgender sportswriters 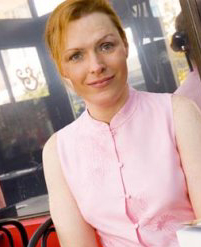 Tonight's episode of Real Sports with Bryant Gumbel features a segment called "The Big Switch," about three transgender sportswriters: Christina Kahrl of Baseball Prospectus; Bobbie Dittmeier of MLB.com; and the late Christine Daniels of the Los Angeles Times. When they came out as transgender, they formed an unlikely sisterhood. And, as Gumbel says in the piece, they ultimately fit a tragic statistic: One in three trans people commits suicide.

We had been contacted by producers of the show a few weeks ago looking for information on Daniels. We introduced them to Daniels' good friend Suzy Horn, who speaks eloquently about Daniels in the piece. Horn shares about the struggles Daniels went through, the pushing of the Los Angeles Times that led to Daniels' very public transition, and she and Gumbel talk at length about the funeral of Mike Penner that Daniels' friends were banned from.

Since watching the piece, I'm particularly interested in Kahrl's journey over the next few months. For the most part, these three women have written and reported from home or an office; This season, Kahrl will be doing more on-site reporting. I'm intrigued to hear her stories of reactions from players, managers and fans.

It's a well-done piece, done unapologetically and with great insight from three women who know better than anyone else the struggles of transitioning gender in sports. The transgender community can be proud of the performances by Kahrl, Dittmeier and Horn; These are three great spokespeople.