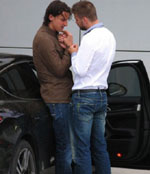 Zlatan Ibrahimovic, the Spanish soccer player caught seemingly getting intimate with a teammate last week (in the brown jacket), was asked about it over the weekend. His answer to all the rumors: He'll have lesbian sex to prove he's straight.

Come over to my house with your sister, and I’ll show you I'm not gay!

Which, of course, has some people even more convinced that he is. For the record, the 6-foot-5 striker is married (or at least has a long-term female partner) with two kids. I don't buy that the pic is of a romantic embrace, but the ensuing hullabaloo has certainly been entertaining.