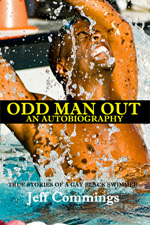 Elite competitive swimmer Jeff Commings, who still swims in master's meets, is coming out with a book later this month that chronicles his life as a swimmer who also happens to be gay and black. Here is the press release about the book (which can be bought here):

Commings spent all of his teenage years and most of his 20s afraid to live openly as a gay man. Though he was a member of several USA Swimming national teams and competed in two Olympic Trials, his fear of rejection from those he loved and respected severely affected his life socially and athletically.

Commings reveals intimate details of his life, many of which have never been made public. But this book is much more than the story of a man's journey to discover his place in a world he feared would shun him. It's also the story of a black swimmer who rose to elite status when he saw very few on pool decks with his skin color.

Growing up in St. Louis, Mo., Commings found a connection to the water as young as 3 years old. He never strayed from the sport, which rewarded him with travel to places he never dreamed he'd see, a free college education and friendships that will last a lifetime. Commings takes us on a rollercoaster ride in "Odd Man Out" through more than 30 years of triumph, sorrow and love. Equally heartbreaking and funny, this book is an uncompromising portrait of one man's quest to fit in on his own terms. It tests readers of all walks of life to look inwardly and reflect on their own fears and insecurities.

I admit to never having heard of Commings, but his sexuality was not a secret in the swimming world. For a short time in 2004 and 2005, he blogged about his long-distance relationship with Geoff. The blog ended when the two of them moved in together and married. Commings graduated from the University of Texas in 1995 with a journalism degree and works as an associate producer for Swimming World magazine and TV.

Update: I received this message from Jeff: "And as for my sexuality being open, I was never publicly out while I was an elite swimmer. I didn't come out until I retired in 1998 and started swimming Masters."