Via SportsbyBROOKS, we learn that Arizona Cardinals defensive lineman Darnell Dockett took a shower live on the Internet, reportedly to win a $1,000 bet. On his Twitter account, Dockett wanted to make it known that he did didn't want any dudes staring at his 6-4, 285-pound frame: 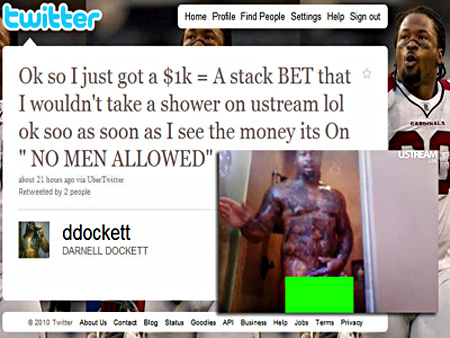 SBB says that based on the screen shots sent to him, it doesn't appear that Dockett ever got naked in front of the webcam, which would seem to defeat the whole purpose of the dare. Live comments on the stream noted this and some people egged him on to show the goods: "Quit bein shy man u do it with guys in the locke room all the time."

Of course, Dockett had to throw out the lame and insulting "NO MEN ALLOWED" comment on his Tweet. If Darnell Dockett was 100% comfortable with his sexuality and his body, he would have welcomed all gawkers.

To make Dockett even more uncomfortable with men staring at him, I pose this question: Hot or not? I vote not (I'll take this jock any day).