Share All sharing options for: Does softball make Elena Kagan a lesbian? 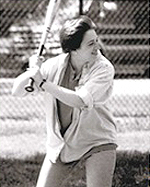 There's been a lot of talk about the sexual orientation of Supreme Court nominee Elena Kagan. Much of it has centered around this photo of her playing softball or baseball years ago. Whereas men playing sports are assumed by the general population to be straight, women playing sports are assumed to be gay. Like I've said for years, if you play sports you must love sex with women.

Yep, it's 2010 and we are still dealing with this nonsense. People think being a gay man in sports is tough - well another example of how women playing sports have their own difficult issues to deal with.