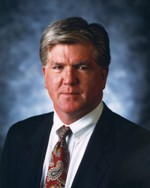 Keeping to his promise to fight against homophobia, Toronto Maple Leafs GM Brian Burke was the featured guest yesterday at Egale Canada's launch of their new Web site, MyGSA.ca. Burke apparently asked cameras to be shut off as he tried to speak about his son, Brendan, so they did not capture his tears. From all reports, he wasn't able to offer more than a couple brief comments about his deceased son. From the Globe and Mail:

Mr. Burke says he’s sure that there are gay athletes in the NHL, and it’s “only a matter of time” before the culture of fear eases enough for a star to reveal their secret.

Until then, Mr. Burke said he’ll do his part to make that an easier process, even if it hurts.

Halfway through his speech yesterday, Mr. Burke braced himself to say some words about Brendan.

“I probably won’t be able to do this...” he began. His eyes welled up. He turned from the microphone, unable to continue.

Later, he said that he felt like he let his son down. But even as Mr. Burke took his seat, audience members were rising from their seats in a standing ovation.

It's huge to have a guy like Burke actively taking a position against homophobia: A GM taking this position tells everyone in his organization that they will not lose their job because they're gay.

Still, I find it interesting that our supporters talk about the culture in pro sports having to change more before anyone can come out. Society is rarely "ready" for social change when it happens: All that matters is that that one person is ready to come out. And as Scott Fujita told me a couple weeks ago, "people will fall in line."