Share All sharing options for: NBA Playoffs heat up players and refs 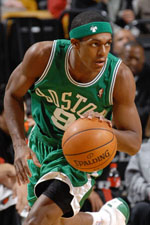 I've had trouble getting into the NBA regular season for the last 10 years. But inevitably, around early May, I get hooked on the playoffs. I start planning my evenings around them. The players seem to suddenly come to life. Whereas they slog through March, in May they turn on a switch. Defenses come alive, guys play through injury. You can see the finality of the seven-game series in the games. And the referees throw things at the fans (video after the jump)!

Being a Celtics fanatic growing up, it certainly was cool watching this "old," "outclassed" team in green take the franchise's first-ever 2-0 series lead on the road. And the possibility of another Celtics-Lakers final is too tantalizing to resist. While I know the rest of the country would have to turn off SportsCenter for the three weeks of the NBA Finals, here's hoping.