Many in the AFL say Akermanis is wrong

Share All sharing options for: Many in the AFL say Akermanis is wrong 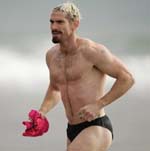 Jason Akermanis has been called a lot of things in the day since he said gay athletes should stay in the closet. But the most powerful thing he's being called is "Wrong." Akermanis' own club, the Western Bulldogs, immediately distanced themselves from Akermanis in a statement:

The club do not agree with the views expressed by Jason Akermanis in relation to the potentially negative impact an openly gay footballer would have on a club. ...

The club also fully supports the AFL, who have undoubtedly shown the way in terms of confronting and dealing with a range of difficult social and cultural issues.

Jason Akermanis’ article is based on his opinion and by no means does he speak for the club or AFL players as a whole.

The Western Bulldogs welcome any person regardless of race, religion or sexual preference and any suggestion to the contrary ignores the tireless work the club and the AFL does in the community to open the doors of AFL football to all.

Akermanis' coach, Rodney Eade, followed suit saying the time of homophobia dominating his club is over.

I think we've come a long way and I think the AFL leads the way in that aspect. Certainly, at the Bulldogs, we think we've got a terrific culture and environment. We select players on what they can do on and off the field as individuals; for their football talent, and certainly the character they bring to the club.

And while Akermanis only sought to discourage gay people from coming out, Eade extended a welcoming hand for gay people to his club:

A central mission of the Western Bulldogs is the respect diversity within our community. The Bulldogs have a strong record in seeking to eliminate discrimination on the grounds of gender, race and religion. It's now time to bring sexual orientation under that protective umbrella.

If any one of our players happened to be gay or came out, he wouldn't be alienated by this group of players, I know that. In today's day and age, it's reasonably irresponsible what Jason's said this morning. It's a staggering story when you read it. If it had been written in 1943 or something like that, you could have been forgiven. But in 2010, to hear something like that is just bizarre.

Sydney co-captain Craig Bolton, who has played with Akermanis, continued the sentiment:

The thing that stood out for me was him saying it could break the fabric of the club. I certainly don't agree with that and I'm sure no other players in our club, if not the league, would. It's wrong to suggest in this day and age players would feel uncomfortable around someone if they came out or wouldn't accept that individual for who he is.

The point of the story is this. If you're gay in the AFL, who are you going to believe? Some bleached-out clown people are tired of hearing from, or some coaches and team captains who have a head on their shoulders?