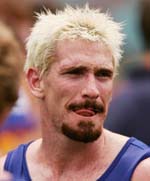 Jason Akermanis is tossing gasoline onto the fire he started a couple days ago when he said gay athletes should stay in the closet. Now he says he doesn't want any gay people in the locker room, even though he said he's already showered with a gay teammate:

Maybe I've got a problem with it. What am I supposed to do? Do you think I'm the only one? That is an uncomfortable situation to be in.

But he's OK with running around in a bikini.

He also attacked the people who are criticizing him.

There's articles everywhere written from these guys and all of them, of course, are gay so they think they know everything and they know more. They're making it personal about me, which is a very dumb thing to do because all I wanted to do was debate the facts.

I may just start referring to this guy as Kelly Bensimon, because he's acting like a crazy idiotic lunatic. "All" of the people coming after you aren't gay, you dumbass. In fact, they're your team owner, your coach, other AFL coaches, other AFL players. Are you saying they're all gay? This guy is the new Jeremy Shockey, except that Shockey knew when to shut up.

He also said in a TV interview that he was totally fine with a gay person in the locker room. Now he says he's uncomfortable with it. I'm telling you, we've got "satchels of gold" here!

Akermanis said in his original column that he isn't homophobic. Many people, including myself, didn't believe it. Guess we were right.