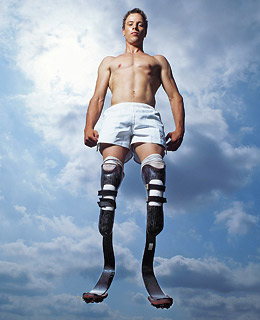 Oscar Pistorius (aka "The Blade Runner") has caused quite a stir over the last few years. Missing the lower halves of his legs, the sprinter has put up times that are near Olympic-qualifying. While the IAAF ruled him ineligible to compete in the Olympics, a court overturned it; And Pistorious' times made him barely missed the South African Olympic team.

The T44 (one leg amputated below the knee - Pistorius has two) world record holder in the 100m, 200m and 400m is hot whether he gets to the Olympics or not. He's 23, stands over 6-foot-1 with his prosthetics, and is an inspiration to many. More photos after the jump.