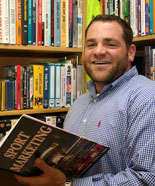 There's a great story on Advocate.com about the Indiana University athletic department participating in the Indy Pride festival on June 12. The Advocate reports:

“It’s someone who is passionate about Indiana athletics,” said Pat Kraft, senior assistant athletic director for marketing. “I see what they’re wearing and if they’re Indiana, I’m all fired up. All I care about is that there are 56,000 people at our football game. Gay or straight, it doesn’t matter as long as they’re Indiana Hoosier fans and they’re excited.”

That game-day attitude prompted Kraft, a former Hoosiers linebacker, to agree to attend his first gay pride event and work a booth at the Indy Pride festival in Indianapolis on June 12. School officials believe the appearance will mark the first time an athletic department has participated in such a festival. According to those involved with the process, the arrangement shows what can happen when the LGBT and sports communities let go of their assumptions and stretch outside their comfort (end) zones.