The NHL playoffs are in the conference semifinals, and along with them comes the worst hockey tradition -- the playoff beard. I mean real beards, not some woman used for cover. It's a tradition to start growing a beard at the start of the playoffs and not shave until the season is over.

Normally hot-looking NHL players during the regular season wind up looking like deranged mountain men or worse by the time June rolls around (most guys simply look better clean-shaven). Greg Wyshynski, Puck Daddy for Yahoo Sports, has a great take on the 10 most fascinating playoff beards so far. "Some are impressive. Some are tragic mistakes. And one is a mullet." he writes.

Wyshynski has before and after pictures of his 10 contenders. My two favorite write-ups are No. 7, Jonathan Toews of the Chicago Blackhawks, and No. 3 Sidney Crosby of the Pittsburgh Penguins.

Last postseason, Chicago Blackhawks captain Jonathan Toews sported thick sideburns, looking somewhere between a Victorian-era vampire and a roadie for Arcade Fire (right). As you can see from this shot at the end of the Nashville Predators series, he's on his way to another mutton-choppy effort. Which is still an improvement from the Mickey Mouse Club cast member he was back in September. 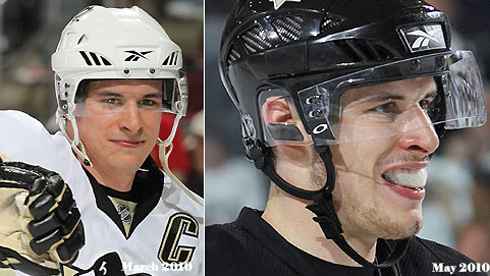 Sidney Crosby's facial hair is, once again, one of the playoffs most well-reported stories. It's as awkward as it was last season: a pubescent, patchy mess that makes it look like he forgot how to properly use soap. It's equal parts inspiring in its bold struggle to become a real beard and sad in its reality. Wonder how Reebok feels about their poster boy looking like the creepy kid watching you play Tekken at the arcade.

OK, puck fans -- thumbs up or down on playoff beards?