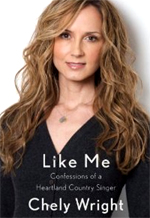 We got a copy of newly out Country singer Chely Wright's new autobiography, "Like Me: Confessions of a Heartland Country Singer

", and quickly scanned it for a sports angle. We knew she had dated NFL quarterback Brett Favre, so we were hoping for some juice. Instead: Nada. No mention of Favre or any other pro-sports exploits she might have dabbled with. Still, sports and athletes do play a role in the book.

In one of the final chapters, called "Stereotypes," she talks about seeing on TV the first two women she knew were lesbians: Tennis players Billie Jean King and Martina Navratilova. She says when she first saw BJK, "it took me a second to determine her gender."

I didn't dress like them -- pants suits and collared shirts -- and I didn't have my hair cut short like they did, but I wondered if I would eventually grow up to look like them. I was afraid that the way they appeared was the way that I was destined to become. It scared me because I couldn't imagine how a woman who had an appearance like they did would ever be able to sing on the stage at the Grand Ole Opry. All of the female country music singers I'd seen on television or in pictures were in frilly dresses with sequins and had long, flowing hair. At that young age, I was very discouraged about all of it.

From the pictures I've seen of her, she definitely figured it out.

Also, while she was at Middle Tennessee State University, she worked at a sports equipment chain named Sport Seasons. It's funny to think of this successful, famous singer selling jockstraps and batting gloves to 14-year-olds. But I guess everyone starts somewhere.