Share All sharing options for: NFL team asking Draftees if they're gay 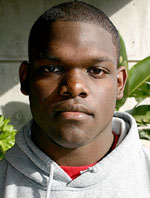 DT Geno Atkins was selected by the Cincinnati Bengals in the fourth round of the NFL Draft last month. But before that, Atkins had at least one interesting question posed by an NFL team in a pre-draft inerview.

"The only unusual question I got was if I was straight or gay," said new Bengals defensive tackle Geno Atkins. "And that was about it."

Unfortunately, he didn't say what his answer was. Either way, you have to assume it's not just one team asking, or that Atkins was the only one asked.