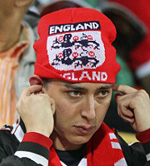 The last thing I expected to be doing on a June Sunday afternoon was to be on BBC Radio 5 debating the merits of the vuvuzela, the plastic horns that have turned the World Cup into one giant constant annoying buzz. I was invited after I wrote an article expressing hate for the vuvuzela, a stance that the vast majority of readers agreed with.

On the BBC, I was pitted against a man from the network who supported the horns, even while admitting he would grow weary of them if he were actually in a stadium. It's a part of South Africa's cultural heritage, he argued. Nonsense. If it's a tradition, it's a dopey one, and not all traditions should be revered. Let the horns be played during South African matches, but nowhere else.

My biggest problem is that the horns have given the World Cup an artificial atmosphere. It's as if they are staging the games on a sound set inside a giant beehive. You can't hear anything else -- not the chants or songs from various nationalities and even cheers after goals sounded muted. The vuvuzelas never stop for 90 minutes, and the sound does not change with the ebb and flow of the game.

In addition, there are numerous articles about the damage to hearing that can result (the horns can reach an ear-splitting 127 decibels, louder than a power saw or rock concert). Hearing loss? What a lovely cultural tradition.

I'm far from the only one complaining. Some players (well, the French, so what do you expect?) are already blaming the noise for distracting them. Broadcasters have bitched to the organizers about the horns drowning everything else out, and ESPN has modulated its sound to minimize the crowd noise. World Cup organizing head Danny Jordaan has said he is monitoring the complaints and could ban the vuvuzelas:

We did say that if any land on the pitch in anger we will take action. We've tried to get some order. We have asked for no vuvuzelas during national anthems or stadium announcements. It's difficult but we're trying to manage the best we can.

Good luck trying to ban them. Imagine trying to prevent thousands of people trying to bring the small horns into a stadium. Or trying to confiscate them during a match. It would be a logistical challenge the organizers would not want to confront. They also would not be wild about being accused of being cultural imperialists. Get used to the buzzing for the next 28 days.

If you have not heard the vuvuzelas yet, here is how it actually sounds for 90 minutes at every World Cup match: