Soccer officially announces it is gay

Share All sharing options for: Soccer officially announces it is gay 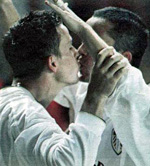 The sport of soccer has officially come out of the closet, ending decades of speculation. I guess Americans were right all along. Said one analyst:

If anything, I think we'll see a firmer commitment to the gayest parts of soccer. Players will feel free now to do their bicycle kicks, juggle the balls with their knees, and generally just be as gay as they want to be without wondering what people think.

Soccer Officially Announces It Is Gay