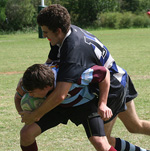 The two-time defending champion Sydney Convicts will try to show again they are the best gay rugby squad when Minneapolis hosts this year's Bingham Cup international rugby tournament Friday through Sunday. The event is named after Mark Bingham, a rugby player who died on one of the planes hijacked on Sept. 11.

Sydney won the title in 2006 and 2008, after the San Francisco Fog won the first two events in 2002 and 2004. More than 30 teams are expected this weekend in Minneapolis. Sydney wants to set a standard by winning its third win in a row, its founder told SX Magazine in Australia.

“It’s also important because San Francisco [Fog] has won it twice, and we have won it twice,” Andrew Purchas told SX. “So in terms of establishing ourselves as the best gay rugby club in the world, winning this year’s cup is important.”

Outsports will have a photographer on scene and we will present a photo gallery and results at the conclusion on the tournament.