Softball team banned by church for having gays?

Share All sharing options for: Softball team banned by church for having gays? 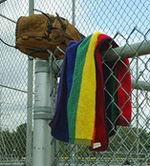 A lesbian softball coach in Memphis, Tenn., says her team was banned from a local church softball league because she is gay. Jana J. Jacobson claims she was questioned about her sexual orientation by administrators at Bellevue Baptist Church.

"Finally, in my frustration, I said that I am going to be clear. I am gay, and I find all of this to be absurd and against the word of God as I know it," Jacobson said of a meeting with Bellevue officials.

Check out the statements in the story about how gays will be tolerated as long as they are quiet about it.

If true, this is another disgusting distortion of Christianity. Jesus Christ would not have told a lesbian she cannot play in his softball league; Rather, he would have embraced her and welcomed her into his congregation. They certainly have the right to associate with whomever they want, but to ban someone because they are gay flies in the face of American and Christian values. They should be ashamed of themselves.