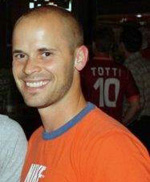 This will be my first Gay Games and I will be running in the 5K and 10K road races. I had always heard about the Gay Games, but thought it was like the Olympics and that athletes needed to qualify to participate. That was before I met my now husband.

Four years ago I met Garry at Pride in Toronto, Canada (while I was vacationing from my home in Pittsburgh) and he told me that he was going to play soccer at the Gay Games in Chicago and that anyone could participate. I decided to research the finishing times for the road races and realized that if I trained I might have a chance at medaling. So I set a loose goal of training to attend the games in Cologne.

Within that period I moved across the border to be with Garry, changed careers, got married, and have become very actively involved in the same soccer league that brought him to the Games in Chicago.

I debated about playing soccer or running in Cologne numerous times, but came to the conclusion that I wanted to prove to myself that I could train and get a medal. I ran varsity cross-country and track all four years in high school and two years in college, and I miss that feeling of accomplishing something just for me. Last summer is when I really started to dedicate my training to run in the Games, with the hope that a full year would be enough.

Training as an adult is a lot harder than it was 15 years ago in high school. I thought I was running good distances and building my speed, until I ran my first road race in preparation for the Games in March, and struggled through all 5 kilometers to get a time almost two minutes slower than my goal.

However, I kept that goal of a medal in my mind and found a training program to provide better focus. Since then I have noticed a greater strength in my legs and clear difference in my speed. I feel stronger and stronger the closer I get to the Games. I am continuing to run races to bring my time down in preparation for August and I feel confident that I have a legitimate shot at bringing home a medal.

Aside from the sports, I also feel proud to be going to the Games as a resident of Canada instead of the USA, and with my husband who is competing in soccer again.

When I met Garry, I never thought I would move to a different country, but as our love grew stronger it wasn’t even a question as to which person would move. The life we can have in Canada is not obtainable in the states. We are legitimately married, and it is recognized federally. We plan to start raising a family in a few years and we will not have to cross any mountains to make that happen. I am very happy to be in Canada and traveling with other Canadians to participate in the Games.