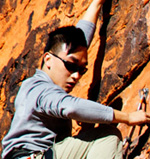 With calloused hands, raw finger tips, and toes crammed into the tightest of shoes, I seldom fail to feel giddy about climbing the 50-foot walls of Mission Cliffs at least three times a week, four hours at a time, in preparation for the Gay Games. Since sport climbing has not been offered as an event in the Games since 1998 in Amsterdam, I could not pass up the opportunity to be a part of it this year in Cologne.

Although I find myself training hard in the gym to increase my climbing technique, strength and endurance as the Gay Games approach, I often remind myself that the sport, beyond physical demands, requires an unwavering amount of mental fortitude. 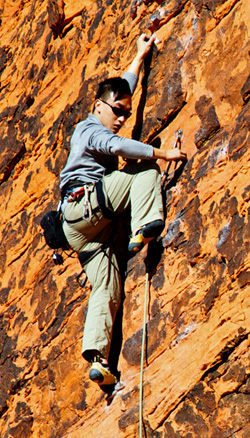 It transcends a simple fear of heights; one needs to climb higher and reach for the next hold (and the next, and the next, etc.) despite physical exhaustion and a voice in one's head whispering, "the higher you go, the farther you will fall." I do everything possible to overlook that voice and envision myself reaching the top. Of course, the more difficult routes I project, the more I will fail. But that is all part of the game: climb until you fall. Then get the hell back up and do it again until you finish.

My last name, Wong, is obviously Chinese, but I grew up speaking Vietnamese and was born in an Indonesian refugee camp. Oppressed by the post-war regime in Vietnam, my brave and cunning parents spent years planning for a daring escape. My mother was pregnant with me when she and much of my family fled from Vietnam by boat, under the cover of darkness. My family made it all the way to Indonesia where they lived in a refugee camp for a year before being welcomed into the United States.

Had it not been for my parents' extreme feat of courage 26 years ago, I would not have the same opportunities I am fortunate to have today. The opportunity to compete at the Gay Games in Cologne this year is one I will embrace with pride for I can represent multiple facets of my identity. I am gay. I am Asian. I am American. I am a rock climber. I am proud. I am grateful. I am ready.