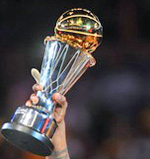 It is rare when a team shoots 32.5% from the field and wins an NBA playoff game, let alone Game 7 of the NBA Finals. But that's what happened to the Los Angeles Lakers, 83-79 winners over the Boston Celtics in a seven-game series that was anything but a classic.

The Lakers won a gritty, ugly game, though the final few minutes were tense and dramatic. The Lakers couldn't shoot and neither could the Celtics (40%). Kobe Bryant was 6 of 24 shooting and Ray Allen 3 of 14, and these are normally great shooters.

Both teams played really tight and the Celtics ran out of gas after building a 13-point lead in the third quarter. The Lakers won by outrebounding the Celtics 53-40, including 23-8 on the offensive glass. And L.A. had a huge free throw edge, 25 for 37 vs. 15 of 17 for Boston. I did not hear complaining about the refs after the game, but I was not able to focus intently on the game and am curious as to what others thought.

This was the first time since the Houston Rockets in 1994 that a team trailed 3-2 in the Finals and won. And prior to Thursday, Boston had been 7 for 7 in NBA Finals Game 7s. That streak ends as the Lakers made it back-to-back titles.