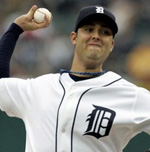 Detroit Tigers pitcher Armando Galarraga was chasing a perfect game Wednesday. He had retired the first 26 Cleveland Indians he had faced, and the 27th batter, Jason Donald, hit a ball down the first base line. Miguel Cabrera, fielded it and tossed to Galarraga, whose touched the bag first. Perfect game? Nope. "Safe," yelled umpire Jim Joyce. (Pictoral evidence here).

Except Joyce was wrong. Replays clearly showed that Donald was out, and a crestfallen Joyce admitted after that he blew the call.

Said Gallaraga: “I don’t know what to say.”

This has already increased calls for baseball to expand its minimal use of instant replays and it's long overdue. Everyone makes mistakes, but replay can at least minimize their impact.

Baseball is still years behind football and other sports, which have seen that replay only helps, not hurts, the game. Trying telling Gallaraga and the Tigers that baseball tradition needs to be preserved.