I was born in Colombia in 1945, but in 1949, political violence displaced my family to the capital, Bogota. I was raised in a Catholic homophobic country and felt guilty about being different. I did not understand my feelings for other boys, but I know now that I was attracted to the same sex at age 5.
At age 7, I saw the ocean for the first time. Water attracted me and I learned to swim. I swam with my sister and my brothers during vacations only. There were only two or three pools in Bogota and they were not accessible. There were no school programs and I did not learn the proper strokes until I joined Masters in 1983. I felt intimidated by experienced swimmers and it took a while to compete. I got a ribbon for third place in the 500 yards freestyle and I was hooked. 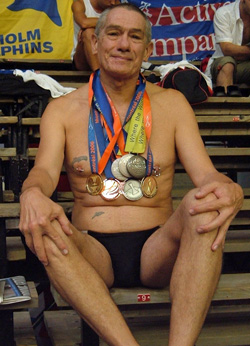 I was attracted to open water and did the swimming parts of triathlons. Later, I did triathlons and we founded the Lake Erie Nadadores in Ohio. We have been training in Lake Erie and swimming open water events nationally and internationally and helping with an open water competition in Cleveland for over 20 years. At the same time, I was coming out of the closet.

I competed in IGLA world championships for the first time in Toronto in 2001. In Fort Lauderdale, in 2003, I won a medal in the first IGLA open water competition. IGLA open water was canceled in Atlanta, Washington DC and Paris, but I got medals each time I competed.

I went to Gay Games in Chicago in 2006 and won medals in the open water and in pool competitions. I participated in the Outgames in Montreal in 2006 and Copenhagen in 2009. One of my teammates says that I am a “medal whore” and that I will do anything for a medal.

Our team contingency will be small in Cologne. Ohio Splash is smaller this year, but we expect to do relays, to win more medals. I am in a new age group, 65-69, and cynical critics will say that there is less competition. Like in the Olympics, I compete against the ones that show up.

I have been a physician for 42 years and balance work, family and training the best way I can. My body and my mind feel best in the water. I started several programs for swimming and water exercises for patients with arthritis. My daughters and granddaughters love to swim. My daughters have participated in open water competitions.