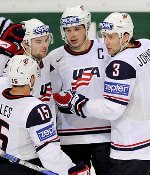 If you want to understand the extent to which Brendan Burke's coming out, and subsequent death, helped advance gay equality in sports, look no further than the U.S. hockey team. One of the most interesting pieces to come out of my conversations with Patrick Burke is the fact that the U.S. hockey team wore dogtags in memory of Brendan Burke throughout the Olympics. Said Patrick:

Jamie Langenbrunner, the captain, organized it. I believe his wife helped handle some of the arrangements. Essentially they had custom-made dogtags made for the players, the coaches, and their families. Langenbrunner presented my father with one before the first game. On one side it has the Olympic rings with TEAM USA and Vancouver 2010. The other side reads simply "In honor of BRENDAN BURKE." The team, staff, and wives all wore them. When I flew out to Vancouver for the gold medal game I bumped into an agent, Scott Norton, and Dustin Brown's wife (Norts represents Brown). They showed them to me and told me about them. I asked if they had more, so Norts rounded up the last 5 or so and got them to me. Myself, my mom, my sisters, and my step-mother got the last 5.

When Miami hockey went on their run, a video coach for the US team sent the Miami coaching staff one of them. They hung it in their locker room for the Frozen Four.

Let that sink in. The captain of the U.S. hockey team spearheaded an effort to get the whole team and supporters to wear something in memory of a gay athlete. Makes me even more proud of that team.