I am a 56 year-old athlete living with AIDS who lives on Cape Cod. I am the Captain of Team Provincetown. I will be competing in the marathon in Cologne. I will be representing Provincetown and the AIDS Support Group of Cape Cod. I have participated in Gay Games III Vancouver 1990 marathon, Gay Games IV New York City 1994 bodybuilding competition, Gay Games V Amsterdam 1998 half marathon, Gay Games VI Sydney 2002 half marathon and Gay Games VII Chicago 2006 half marathon. My personal goal is to complete one more Gay Games marathon.In Gay Games VII Chicago 2006 I was honored to be nominated for the prestigious Tom Waddell Award. I was also honored to take part in opening ceremonies as one of the runners escorting the rainbow flag into Soldier Field. The intensity to be on the field surrounded by thousands of spectators was a tremendous rush.

This year I completed my 13th Boston Marathon. I have been featured in many news articles -- the Wall Street Journal, the Boston Globe, the Cape Cod Times and the Provincetown Banner. 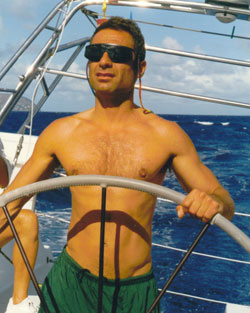 I have been living with an AIDS diagnosis for more than 20 years. I have been HIV positive for 22 years. Currently, my T-cell count is 198, a count which is still well below the normal range. I have overcome tragedy and triumphed many times to stay alive.

In 1997, while living with the virus, I became the first person to finish a Boston Marathon after nearly dying from AIDS in 1995. After that triumphant run, I was selected to crew on "Survivor," an all HIV/AIDS crew that raced in the 1997 TransPac. A prestigious boat race held every two years since 1902 racing from Los Angeles to Honolulu. An HBO documentary, "Rock the Boat," chronicled our challenges and accomplishments during the race.

I credit my strong will to live through the lessons and the blessings of the two strong spiritual women in my life, "Mom" Amybelle Olatunji, the wife of the famous drummer Baba Olatunji and Beatrice, my Yurba godmother. I met them in 1985 when my beloved partner Kevin and I opened the first organic raw foods restaurant in New York, "Manhattan Live." Kevin died on World AIDS Day Dec 1, 1990. My second love Michael Kerwin succumbed to AIDS in 1995.

When I ran my first Boston Marathon, I discovered I loved the sport. Then in 1982 when I read about the first Gay Games in San Francisco, I was sure that I wanted to experience my sport with like-minded LGBT athletes.

It wasn't until 1990 that I was able to attend my first Gay Games, in Vancouver. Unfortunately, AIDS hit. I could not make opening ceremonies in 1990 because AIDS was in my household. It was a difficult year. My love, my husband that I loved more than life itself was diagnosis with AIDS that year. It was truly miraculous that I got any training in and made it to the Games in Vancouver to run the marathon because I had to care for my Kevin.

Crossing the finish line at Gay Games Vancouver in 1990 and attending closing ceremonies was a lonely feeling because Kevin could not be with me to share the moment.

I finished my 13th Boston Marathon in April, but the Gay Games Cologne Marathon has more meaning to me because it is with my community. It is important for me to run one more Gay Games marathon. My spirit feels this will be a piece in the chapter that ends the book I am writing, "Soul of the Phoenix." A love story, an inspirational story, a journey of tragedy and triumphant, learning not just to survive but to thrive. It will be out within the year.

An added joy for me to attempt the Marathon at Gay Games Cologne is I will have my partner with me this time to share the moment.

A great benefit for me to participate in the Games is I have made many friends and consider them my Gay Games family. I love that this event brings us back together every four years. Friends like Brent Nicholson, who is one the three finalist for the Waddell Award, Lydia la Riviere-Zijdel from Amsterdam, who won the Tom Waddell Award in Chicago and many other friends. The Games are a part of me and has become a tradition for me to participate.