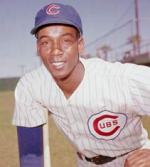 While we already reported the Chicago Cubs will have a float in the Chicago Gay Pride parade this Sunday, they've now announced that Hall of Famer Ernie Banks will represent the team on the float!

Cubs Hall of Famer Ernie Banks will ride on the float, which will be red, white and blue with bricks and ivy. The song celebrating wins at Wrigley Field -- "Go Cubs Go" -- will be played on the float. The parade route is near Wrigley.

"I would say it's part of being a good neighbor by the entire Ricketts family and Cubs organization," Cubs senior vice president of community affairs Mike Lufrano said. "The Cubs have supported the parade for many years, although this is the first time we'll have a float as an extension of the support the team has had for the community."

This is huge. First the Stanley Cup, now a Hall of Fame baseball player? Wow. Ernie Banks was the Cubs' first black player; Fitting that he would be a part of this historic event.