I’ve been to Cologne once. It was 1979. I was living with a family in Krefeld, West Germany, for the summer in a program for high school students sponsored by Indiana University. My family and I took a day trip to Cologne in their old Russian car that could only do 50 mph on the famed, speed-limitless Autobahn.

They were excited with the anticipation of seeing my reaction when I laid eyes on the “Kölner Dom” (pronounced dōm). All the way down, I watched, disheartened, as BMWs and Audis flew past us, and listened to everyone talking about the Dom.

“Wait till you see the Dom. You’re not going to believe how incredible the Dom is.” As we drove over a ridge, the Cologne skyline came into view. Everyone was oohing and ahhing. “What do you think?” “About what?” I said. “The Dom!” they shouted, exasperated. “Where?” I asked. “What do you mean, where? It’s right there!” they said. I looked all over that skyline, but I didn’t see any dome. All I could see was some big church, but nothing that looked anything like the Houston Astrodome. I figured out, with some embarrassment, what they were talking about. That's why I never forget the German word for cathedral. 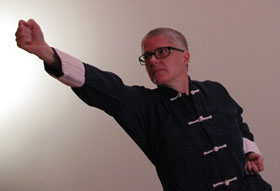 Four years later I attended the University of Tübingen, and I haven’t been back to Germany since. The Games are giving me an excuse to get back to Germany for the first time in 26 years. I’ve been studying martial arts for 13 years — karate for the first eight; tai chi the past five. I live in Chicago and competed in my first Gay Games here in 2006. I had only been studying tai chi for a year, but I had to compete against black belts because I had already earned a black belt, even though it was in karate.

My goal was not to look out of place with my fellow competitors, most of who had been training in their styles for many years. My teacher spent extra time helping me prepare, then she and several of my fellow tai chi students came to cheer me on. Many friends at my old karate school were also there to compete. We had a great time. I didn’t win a medal, but I certainly didn’t feel out of place.

I'm looking forward to my second Games. Once again, I'll be competing in martial arts, doing a tai chi empty-hands form. My goal this time around is similar – not to look out of place the other participants and to represent my school, the Tai Chi Center of Chicago, and its lineage to the best of my ability. I'm also looking forward to my third trip to Germany. On my first two trips, I was in denial about my sexuality. This time, at 47 years of age and in a 13-year relationship, I'll see the “Kölner Dom” from an entirely new perspective.