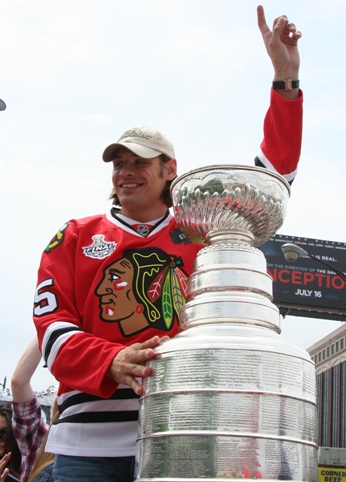 The Stanley Cup champion from the Chicago Blackhawks, who actually was traded to Atlanta earlier this week, rode on the Chicago Gay Hockey Association (CGHA) float for the parade on Sunday. Sopel brought the Stanley Cup and raised it over his head no less than 10 times along the route.

More and pics after the jump.

“I had a great time, way better than I expected,” Sopel said in an exclusive post-parade interview. “It was more (fun) than I expected; it was a blast. Everyone was fun, everyone was dancing. But, at the end of the day, I hope it raised some awareness.”

For Brendan Burke, the son of Toronto Maple Leafs general manager Brian Burke. The younger Burke, who was a manager for the Miami (Ohio) University hockey team, revealed he was gay last November and sadly was killed in a car crash this past February in Indiana. Sopel wore a green shamrock with the initials BB inscribed on it on his red Blackhawks uniform in the parade. Members of the CGHA also had BB printed on special white parade t-shirts and red jerseys.

“I wasn’t here to advocate (anything), but if coming here helps break down walls in the meantime, so be it. I was here for Brendan,” said Sopel, who rode on the float with his wife. “I hope he is smiling (from heaven).”

Sopel met the late Burke several times. “He was a very unique individual,” Sopel said. “For him to come out, and then die a few months later …when you’re a parent and you have to bury a kid, it’s just heartbreaking.”

So, when will there be an openly gay athlete in one of the four major sports?

“I don’t know. I’m sure someday there will be, but when that time is, I’m not sure,” Sopel said. He added that he would support a teammate who came out of the closet while playing.

Added Andrew Sobotka, president of the CGHA: “It worked out perfectly, better than we expected. The weather. The crowd. Sopel. The Cup. Everything was in place. It was great.”

You can read more from Ross Forman on his blog. 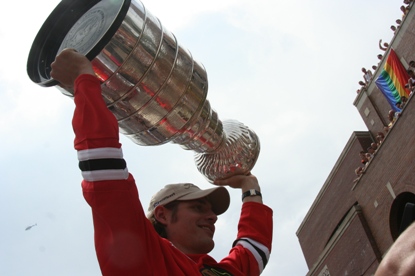