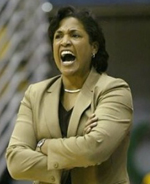 Talk about a program in disarray. The Oregon State women's basketball program has been ravaged by the departure of 23 people in the last four years, all apparently because of the alleged brutal actions of head coach LaVonda Wagner. According to the article and a great analysis by Pat Griffin, she is accused of...

• Bullying or ignoring injured athletes (including one with a concussion, pressuring them to practice and play anyway.

• Throwing a chair during a locker room tirade (it barely missed a player).

• On a trip with the team, being removed from an airplane because she refused to get off her cell phone when directed to by the flight attendant.

• Ordering players to attend Weight Watchers and pay for it themselves because she thought they were too fat.

• Demoralizing some players so much they needed to get counseling.

• On road trips refusing to allow players out of their rooms except to practice and play games (even on a trip to Hawaii).

What makes it even crazier is that the university administration was told about this behavior over and over again from staff, players and parents. And they did nothing.

Griffin makes a great analogy between what has happened at Oregon State and what many gay and lesbian athletes face. If an athletic department won't respond to or take action on these allegations against a mediocre-at-best coach, how can any gay athlete expect them to take action against a homophobic coach, particularly one that is successful?

Since the report came out, Wagner has been fired. But she will receive $1.2 million to walk away from the disaster she left behind at Oregon State.