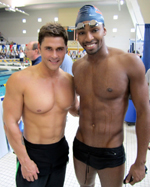 Editor’s note: Swimmer and former Project Runway contestant Jack Mackenroth will blog regularly leading up to his participation in the Gay Games.

My last post was last month just after I had finished a week of intense training at swimming boot camp at the Hall of Fame pool in Ft. Lauderdale. Since then my training has been going well although it’s hard to fit the necessary hours into my hectic daily life. I train with Team New York Aquatics when I am at home in NYC but often swim with other teams when I am on the road. This month I had the pleasure of swimming with the Florida Nadadores. I have swam with them in the past and it’s fab to swim in Miami because the pools are beautiful and you get to swim outdoors and get a tan at the same time. However, apparently the Nadadores are temporarily using a transitional pool while their usual training facility is getting a face lift. I don’t know Miami very well but I was warned by my taxi driver that it was not in a very good part of town. I figured, “I live in New York–how bad can it be?” Well it turns out that the week before someone from the ‘hood was actually shot in the parking lot during a swim workout so they hired an armed guard to escort swimmers to their cars. During my second workout with the team, one of the swimmers found a gun at the bottom of the pool. I’m NOT kidding. It turned out to be a toy gun but it looked real and that was enough for me. Really? Wow. I love swimming but I’m not gonna take a bullet for it. On the flip side the Nadadores are a great team and I hope they survive to get back to their old digs.

Anyway–I digress. In my last post I mentioned I swam in a small meet in New York and did some of my best times in years so I decided to enter US Masters Nationals. US Nationals is the most competitive competition in the country for Masters swimmers and although it’s a fun event, people are very serious. Masters is the division of swimming or adults after college and Olympic level. Swimmers compete by age group starting with the youngsters at 19-24, 25-29 all the way up to 100+. The oldest swimmer at this meet was 93-year-old Anne Dunivin. I watched 2 women who were 88 and 90 battle it out in the 100 freestyle and they both went 1:57. For all you non-swimmers out there–that is 4 lengths of the pool in under 2 minutes!! It’s incredibly inspiring to see people swimming competitively well into their 70′s, 80′s and 90′s and some of them are still incredibly fast! There are tons of former Olympians in all the age groups like Rowdy Gains (below), Cullen Jones (pictured above) and Mark Gangloff, all of whom are national record holders.

It’s a four-day meet with over 2000 swimmers from all over the country and EVERYONE is fast because you have to qualify by beating the standard set for each event in order to participate. I’ve been to Nationals about 8 times in my swimming career and this meet was by far the most competitive I’ve ever been to. I think part of that has to do with the fact that this is the last national meet where swimmers are allowed to wear the bodysuits before they are banned in June. (Yeah for men in tiny speedos again!!!)

The meet was held at Georgia Tech pool which was the site of the 1996 Olympics. At those Olympics I was actually working on deck as an athlete escort. I was responsible for taking the medalists from the race finish to the awards ceremony and making sure they got there on time while doing press interviews. It was one of the most amazing experiences of my life. It was also a thunderstorm of emotions because 3 days earlier I had attended the memorial service of my boyfriend, Greg Beutler, who died of AIDS. I almost didn’t go to the Olympics but in retrospect I’m glad I did because it helped me cope by taking my mind to a better place.

Below is a recap video of the meet with interviews from some of the swimmers. One of the most inspirational swimmers is Mike Taber from the Adirondack Masters. He is completely blind and swims by brushing along the lane line and has a guide tap him on the back when he is close to the wall so he knows when to turn. I’m assuming he also counts his strokes so he has an idea of where he is in the pool. It was really inspiring to watch his swims. You can see what I mean in the video below along with testimonials from some of the top swimmers.

Back to New York tonight and back in the pool tomorrow!!!