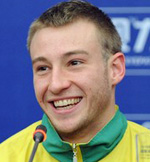 Matthew Mitcham must feel like China is a home-pool advantage for him. First, he won the gold medal in the 10-meter men's platform at the Beijing Olympics, coming from behind on the final dive. And Sunday he won the 10-meter event again at the FINA World Cup in Beijing. And he needed a perfect score to do it.

Mitcham was fourth after the first two rounds, then pulled off what was described as a "flawless new dive - an armstand-back double with a two-and-a-half twist - that earned perfect 10s from the judges." Like in 2008, Mitcham beat two Chinese divers for the top spot.

"It is the second time I have beaten the Chinese on their home ground," Mitcham said.

"The Chinese crowd is very supportive of me and they appreciated the good diving.

"Even though this is my second PB in a month, I still don't feel I have dived my best and there is still room for improvement before the London 2012 Olympics."

Mitcham, who is openly gay, said he is diving better than he did in Beijing. He showed again that he can perform in the clutch.