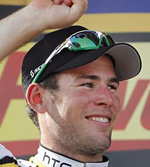 British cyclist Mark Cavendish has won two stages of the Tour de France, and after his first win he bawled his eyes out. He is a perfectionist who needs everything just so, his teammates say. And that extends to his appearance.

Members of his team joke about how preoccupied he is with his looks.

“You know the expression dandy boy? Well, Mark is like a dandy. When it comes to worrying about his looks, he’s worse than a woman,” Brian Holm, a race director on the HTC-Columbia team, said with a laugh.

“He’s always asking people: ‘How do these sunglasses look? Are they just right? Are you sure?’ It’s kind of sweet. He has a million different hair products.”

At last check, Cavendish, 25, is dating a former Miss Italy, and it sounds like he needs more time getting ready than she does.