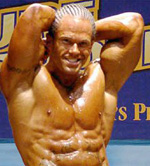 My name is Dustin Robertson, 34, aka Aviddiva. I’m 6 feet tall, 225 pounds. I’ve competed in bodybuilding as a hobby for many years. What I enjoy most about competing is the discipline.

Getting into condition forces me to take my body the entire way down to my lowest body fat percentage. It feels great and it’s always fun to show off all my hard work in the gym. I can’t wait to show off my muscle on the dance floor at the opening party of the Gay Games. This will be my first Gay Games. I’m excited to meet other gay athletes from around the world.

At one point, I canceled my trip after the Gay Games wrote to explain that they would be drug testing for bodybuilding. I wouldn’t pass these drug tests, as I am a competition bodybuilder who does use steroids and supplements, as do my competitors here in the U.S. within the division in which I compete.

I am scheduled to compete before in LA at the NPC Los Angeles Bodybuilding Competition on July 24 where they do not test for drugs. After canceling my plans to compete at the Gay Games, I got a call from the Gay Games saying they had successfully petitioned to make a separate category for visiting competitors for those bodybuilders who would not pass the drug tests. So my trip is back on.

I make music videos for a living in Hollywood. As part of my prep for the competition, I must diet for 16 weeks quite strenuously. All my meals are measured out and timed. Organization and a calm, consistent environment are essential for success in dieting for me.

Four weeks into my diet, I got a call to edit the music video “Alejandro” for Lady Gaga. Of course I couldn’t say no to LG and so I took time out of my competition prep in Los Angeles to fly to New York to edit the video. Being in New York City really threw off my training and diet for a week. I had a blast with Gaga and I’m glad I said yes, but oftentimes I must juggle my hectic work schedule with my bodybuilding, which can get really frustrating. I am still playing catch up from this slight setback and I very much hope to be showing my best by Germany.

As an out, gay bodybuilder (videos here), I’m excited to finally compete at the Gay Games because of the music selection for my posing routine. When I compete in the U.S., I tend to play everything way down. I choose timeless, more masculine electronic pieces. At the Gay Games, though, I’m choosing to pose to something very gay (I won’t spoil the surprise). I’ll post the final videos of everything on my websites eventually as well.

Click image below for larger view and that image for a full-size view: