Share All sharing options for: Norman Chad's cool with the gay thing 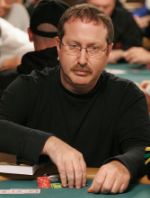 I stumbled across a great little tidbit from ESPN personality Norman Chad. It's a part of his series, Couch Slouch, which he wrote for the Houston Chronicle. In it, he talks about unfounded rumors:

Elsewhere online, you can find "Norman Chad: Gay?" threads. This happens largely because, on occasion during poker telecasts, I'll talk about a man being attractive.

On one forum, a poster mentions seeing me at a Tampa Bay gay bar, then another confirms I was there, dancing. Alas, (1) I have never been to Tampa Bay and (2) if I were ever seen dancing in public, there likely would be a court order preventing me from ever dancing again.

Anyway, I feel kind of small denying that I'm gay while millions of gay Americans are denied their full civil rights.

So - for you folks online - if you want me to be gay, I'm gay. I just hope the Red Sox and Yankees both lose.

Could a sports reporter get any cooler about homosexuality? The line about feeling small denying he's gay is welcoming and insightful. If every sports writer approached gay issues this way, I truly believe we would have an out active pro athlete in the U.S.