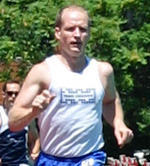 My involvement in the Gay Games began with the New York closing ceremonies in 1994. I handed out information and buttons for one of the sponsors. At that time, participating in the Gay Games hadn’t crossed my mind. A few years before, I put my racing shoes away and retired from competition.

Prior to Gay Games V in Amsterdam, a friend of mine approached me to run in a 4x400-meter relay team with him. I wasn’t competing seriously at the time, so it was an interesting proposal and I decided to go. Although the relay team never came to be, I had a great experience in Amsterdam and won a bronze medal in the 1,500 meters. I have participated in every Gay Games since.

There have been highs and lows over the years. I had the flu in Sydney in 2002 but had a great time anyway. I only got to run the 800- meter prelims on the track before spending a few days in bed. By the end of the week, I had recovered enough to run the 10K road race and came away with a gold. My partner and I used our time on the other side of the world to explore New Zealand and the Great Barrier Reef. It was an amazing trip that we may have never had if it wasn’t for the Gay Games.

The Games came home for me in 2006 and I was determined to perform at my best and prepared well. I didn’t run my best times but performed well and won gold medals in the 1,500 meters, 800 meters and 4x400 relay. It was nice to have the Games in my backyard, but I missed the excitement of traveling. Seeing a different city is a great part of the Games experience. I am looking forward to Cologne.

Between the 2006 games and now, I have had a few setbacks. In late 2007, I was injured in a basketball game and tore the ACL in my right knee. My knee reconstruction surgery went well and I recovered to the point where I could play basketball and train moderately with little discomfort.

When I started ramping up my training for Cologne in late 2009, I started feeling terrible pain near one of the surgery sites. I went back to the doctor and found out that one of the screws used in the surgery was causing the pain. The screw was getting in the way of hamstring tendons that wrap around the tibia. Minor surgery was recommended and I had the screw removed in April. The surgery went well but derailed my typical training plan. After a couple of weeks off, I started cross training. It is very difficult to simulate the rigors of middle distance training in the pool, on the bike or on the elliptical machine but I gave it my best shot. Six weeks after surgery, I adjusted my expectations and started running on the trails and on the track.

It has not been easy, but I am looking forward to having fun in Cologne. My fitness will not be close to where I would like it to be, but I am really looking forward to seeing all of my Gay Games friends. The Games really are about personal best and having fun. The track and field community is so supportive that every day at the track is a blast.